I Summarise this as Caution and respect of Nigerians, by Nigerians for Nigerians if you are really Nigerian 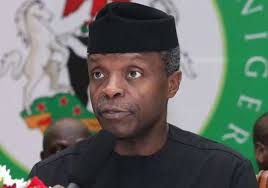 I Summarise this message from the Acting president Osinbajo as “Caution and respect of Nigerians, by Nigerians for Nigerians if you are really Nigerian”

I am sure i am not alone in wondering if there a huge market out there for spewing incendiary comments from different blogs, full of half truths or blatant misleading stories disguising as truth. However for some reason these rumour mongers somehow do always gain enough traction to heat up the polity. Our low sense of veracity in checking the accuracy of information before believing and spreading the rumour is called into question again. This message from the Acting president is very welcome by me:

Abuja – The Acting President on Wednesday urged Nigerians to exercise caution in their utterances and respect each other in their conversations and interactions to foster national unity. Osinbajo Speaking at a seminar on national unity and stability at the DSS Training School, Bwari, Abuja, Osinbajo also advised the citizenry to shun all narratives which foment trouble and create divisions and embrace those that unite.

According to the Acting President, the language of exchange in the country must be civil and we must not tolerate a situation where people speak in any way they like. He was reacting to hate speeches which had crept up in different sections of the country, thereby heating up the polity.

Osinbajo warned that the Federal Government had no choice than to ensure the security of lives and property of citizens. He noted that the administration had initiated series of social investment programmes to promote social justice and give all Nigerians a sense of belonging. “The truth is that we have a duty to ensure that we deal seriously with the issue of poverty and social justice,’’ he said, adding that the N500 billion earmarked for social investment programme would be utilised in that direction. He said that the fund was not for poverty alleviation, but specifically meant to correct the social and economic imbalance in the country.

Osinbajo noted that many Nigerians were poor not because the country was not endowed but due to massive stealing of public funds by past leaders and said it was the duty of all to stand against corruption. He observed that Nigeria’s destiny is in the hands of the youth who constitute two-third of the country’s population, urging them to get actively involved in the nation’s political process. “If you must take over, you must be directly involved in the political process of your country,’’ he said. The acting President stressed that no matter what side of the divide one stands, “We are greater together than apart.”(NAN)