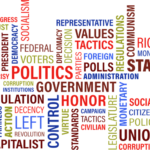 It is true a people get the leadership they deserve.

It is stunning to realise after almost 60 years of independence, we have a democracy complete with a constitution and political parties vying for the Nigerian people’s support BUT without a defined POLITICAL IDEOLOGY REFLECTING our common values. 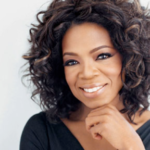 Oprah Winfrey could win, but they are rightly asking: What will her policies be?

A few days ago popular talkshow queen and richest woman on the planet gave an impassioned speech inspiring hope and a frenzy by US Democrats to make  her their US political candidate for 2020. The US Republicans responded by saying she will be a popular formidable candidate, but we don’t know where she stands on the ISSUES yet and if the American people will agree with her POLICIES.

If WE THE NIGERIAN people continue to blame and wait for the Nigerian government or political class or legislators to postulate an ideological framework to underpin our policies, then we will wait for perhaps the next 100 years before enough legislators with the selfless mindset and political capital can give back initiatives to the people fully confident that the people will back them enough and accept their motives.
An example that shows waiting for the change to come from the political elite is futile. Senator Ben Murray Bruce contested to become Senator, actively boasting he will slash the pay package of Senators who consume a whooping 30% of Nigeria’s budget. Its been over 2 years now since he won, and he hasn’t managed to get enough senators to pass his bill for this. Actually when you think about it, it is actually counter intuitive that he can on his own.

It is also counter intuitive that WE THE PEOPLE are not outraged enough to use the instruments within democracy that ensures power emanates from the people not just from the ballot box, but through PETITIONS, RECALLS, IMPEACHMENT and PEACEFUL PROTESTS. 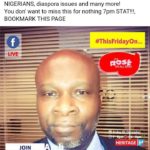 While being interviewed by the eminent ROAS talkshow host “Rose P Graham”: I was asked what i thought of Atiku vs Buhari for 2019? I responded that while it is too early to say, the rate at which Atiku has changed political parties and positions; is for want of a better term, akin to POLITICAL PROSTITUTION.

As harsh as that characterisation seems, the truth is we the Nigerian people don’t really see anything wrong with Political prostitution. When we have our political ideology defined, then the real CREDIBLE candidates will bubble to the top and become ELECTABLE.
We are not alarmed that we have not yet evolved our political discourse and partisanship to be guided with the fluid marker of political ideology. We are content with aspiring politicians promising us a revised manifesto, of previous candidates without being bound by ideals that will lock them down to our customary ideals cum policy positions, with which the candidates debate to get nominated for their party ticket.

Above all we have twisted our ironical method of communicating cultural wisdom, to that of communicating ethnic despondence and “analysis paralysis”, instead of digging at the roots of our problems. So we find it easier to be DISMISSIVE, propose nothing, do nothing, and somehow still expect EVERYTHING. This leaves our default political ideology to be guided by our primordial ethnic, religious and basic physiological needs.
So we shouldn’t be surprised that promising stomach infrastructure is the most effective method politicians use to attract votes from shortsighted constituents. A politicians first and most important job is to get elected into office, by any means necessary, and they will continue if not checked/reminded of the purpose of the political power given them by the enlightened citizens (of all disciplines) and supposed intelligentsia. 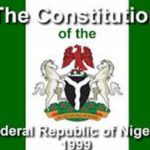 The Nigerian political system has enough instruments to empower the people to reclaim their power and keep their politicians honest, but only when WE THE PEOPLE are united and speak together in a loud enough voice, such that the politicians and leadership have no peace if they don’t respond to us, their true employers. 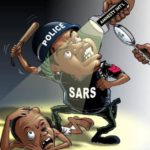 The fourth estate of the Realm (4th Pillar of democracy), ie the Media (especially social media), did their part excellently well, with the uproar against Buhari and his government reinstating Maina, such that Maina was promptly fired.
Right now! Using this same powerful medium, my good friend “Segun Sega Awosanya” and other patriots are applying these constitutional instruments of public petition and peaceful protest to reform SARS and it is working!

Once again the problem with Nigeria is with the Nigerian people entertaining being dismissive, not committed to policy positions and not standing our ground together and applying our thoughts together enough on these values. Our democracy is modeled after the American democracy, and therefore you will think that attention will be paid to the potential policy positions of candidates based on record. If we do not learn about the potential candidates past record and then contrast with our documented ideals/values, we cannot have any apprehension of their future behavior in favour of those ideals. This is why corrupt politicians are electable, as if they are credible, and the truly CREDIBLE candidates, are NOT ELECTABLE.

Chapter 7, Nigerian political ideology is included in this book 1, because the current Restructuring debate will be partially meaningless if there is no developed and accepted ideology that encompasses our historical or agreed values and ideals. Otherwise we will end up economically restructuring Nigeria based on crude oil revenue allocation, albeit the western nations will stop using fossil fuels in about ten years from now; Without really restructuring it politically and most importantly without removing the elephant of corruption from the room.
If we want change we need to start from the building blocks of it, the “square root” of our problems. So if you are truly fed up of the vicious cycles we have been going round in, and the grand standing, then get your copy of this book and order copies as gifts for those (with their email addresses) you believe should have a good read to get fired up. So we can start this national conversation using the suggestions, to bring it to the fore of our consciousness and agree on our acceptable values and ideals going forward.

When we have our political ideology defined, then the real CREDIBLE candidates will bubble to the top and become ELECTABLE. 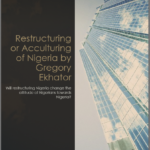 RESTRUCTURING OR ACCULTURING OF NIGERIA BOOK 1